“At our first minicamp in Phoenix, I said I wanted to go to the Super Bowl.  Some of them had never heard that before.  I did a lot of things.  I told them to turn around to the guy behind them and say, ‘I love you.’  You should have seen the eyes roll then.  If you never have been to the mountain, it’s hard to understand what the mountain is like.  Part of the problem in Chicago is that complacency set in.  It almost seemed like the goal was to be average.  The goal was never to be the best.  People were always saying, ‘We can’t compete with Minnesota or Detroit or Tampa Bay.’

“It was a defeatist attitude.  I thought we could be as good as anybody.”

Excerpt from DITKA:  An Autobiography, by Mike Ditka

The Smith-era Bears were smelted together from several colleges of football belief:  The oaken resolve of the Jauron holdovers, the ballistic athleticism of Lovie’s cover-2, and franchise pillars of leadership in Brian Urlacher and Olin Kreutz.  Names like Tommie Harris, Mike Brown, Lance Briggs, Charles Tillman – all “homegrown” members of an elite defensive fraternity, had forged a bond with Smith and one another that led the Bears to 4 NFC North division titles, 2 NFC Championship appearances, and 1 trip to the Super Bowl.

The same prowess and game-breaking ability could not be applied to the offense, however.  Rex Grossman was excellent, except for when he wasn’t.  His leadership and affability with teammates couldn’t offset years of frequent injury and abysmal turnover-riddled performances — one of which was Super Bowl XLI.

Then-General-Manager Jerry Angelo boldly looked to rectify the long-ailing Bears quarterback situation by trading for Jay Cutler in 2008.  Cutler wasn’t given much to work with, inheriting a Ron Turner offense bereft of weapons, a shaky offensive line, and an embarrassing lineup of receivers.  Cutler himself was quick to earn criticism, as his often sour facial expressions wrought questions of his leadership, while his inescapable habit of throwing interceptions brought on the wrath of fans.

Mike Martz was hired to fix Cutler’s game, and this is where things really began to go wrong.  Devin Hester, arguably the greatest kick returner in the history of football, was transitioned from cornerback to receiver (spoiler:  it didn’t work out).  Seven-step drops behind a porous offensive line led to Cutler’s body getting smashed.  Cutler’s friend and favorite target Greg Olsen was traded to Carolina for scraps, where he went on to become a Pro Bowler.

Cutler still threw picks, still suffered injuries, and still wasn’t a franchise quarterback for a franchise that has only ever dreamed of having one.

Martz and Cutler didn’t work out.

After Martz was unceremoniously dumped, Lovie Smith promoted Mike Tice to offensive coordinator.  Phil Emery is hired as GM, on the condition that he keep Lovie for one season.  Emery reunited Cutler with Brandon Marshall, in hopes it would reignite both of their respective careers.

Tice and Cutler didn’t work out.

The Bears still managed to go 10-6 that year, but missed the playoffs.  Starting 7-1 only to finish by losing 5 or your final 8 games put Smith in the auspicious position of having missed the playoffs five of his last six seasons, the last under the watch of a General Manager who didn’t want him as coach in the first place.

On New Year’s Day 2012, Lovie Smith and the Chicago Bears parted ways.  It was a move that felt simultaneously inevitable, frustrating, deserved, and outrageous, but if the franchise knew just how bad things would get, maybe they would’ve thought things through a little more.

Phil Emery’s mission was to give Cutler the ammunition to succeed, and in addition to Marshall and Matt Forte, provided another playmaker in tight end Martellus Bennett.   Many thought that with these new and existing pools of talent in addition to the supposed wisdom of Trestman that the Bears would enter a golden age of uncommon high scoring football.

What wasn’t fully considered was the impact that Lovie Smith’s departure had on the entire roster, primarily the defense.  His firing was considered an act of betrayal, and if anyone was paying close attention on 1/1/2012, you could tell the waters of the well were beginning to stink of poison:

“I think it’s going to be a sad day at Halas Hall.” – Jay Cutler

“I don’t even know if I want to play again.” – Devin Hester

“How could you do it to this guy?  I don’t want to play for another head coach.” – Brian Urlacher

“Guys are willing to run through a brick wall for (Smith), and when you have a guy like that, it’s hard to find.” – Brandon Marshall

‘‘Before he even said anything, I looked at Lance and was like, ‘I can’t believe this is about to happen.’  I felt like I got kicked in the stomach.’’ – Charles Tillman

‘Everyone was very emotional.  It was like losing a relative.’’ – Chris Conte

Adam Jahns’ brilliant retrospective piece on Smith’s relationship with his team really puts in perspective just how much this man meant to his roster: 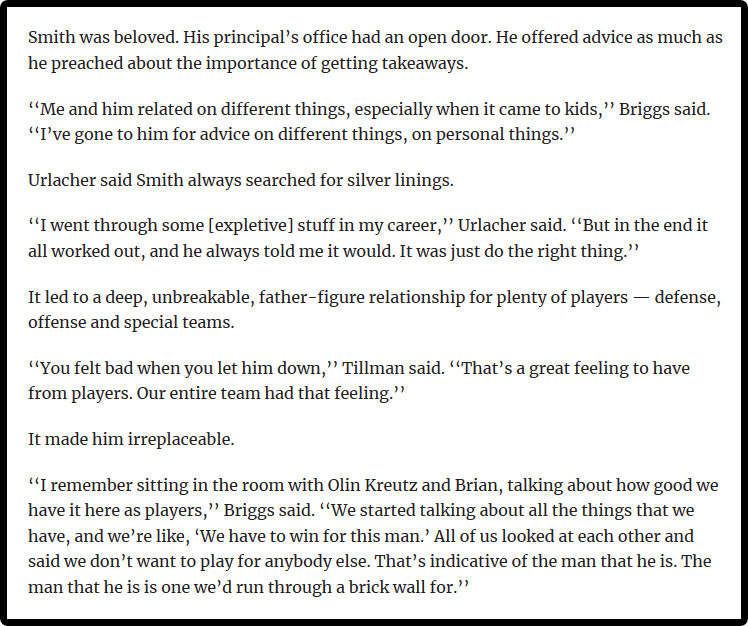 Many fans may roll their eyes at the quotes celebrating Lovie’s familial bond, but I would hope readers recognize the imperative relationship between Lovie Smith’s departure and the Bears quick decay into a franchise at death’s door.

To say that Lovie was innocent is wrong.  His offenses suffered greatly thanks to a combination of constant staff turnover, poor drafting, and stupid personnel decisions.

Thomas Jones should never have left Chicago, just as Cedric Benson should never have been drafted to play there.  Greg Olsen shouldn’t have been traded, nor his replacement Brandon Manumaleuna ever been signed.  Sports radio callers opined for years (and perhaps still to this day) that the Bears should’ve stuck by neckbearded whiskey connoisseur Kyle Orton instead of pulling the trigger on the Cutler trade.

The positives for both men’s Bears tenures out-trend the negatives, but those negatives left deep scars; scars that the Bears to this day are still trying to heal.

But as the Chicago Bears transitioned into Marc Trestman’s regime, those wounds were still fresh, and the era of bad feelings had just begun.