Mike Glennon is not a good quarterback, but at least he’s not Jay Cutler.

Mike Glennon can’t extend plays with his legs, but at least he’s a nice guy.

Mike Glennon can’t go through progressions with his targets, but at least he doesn’t have a punchy-face.

Mike Glennon misses open receivers, but at least he kept the Bears in a close game.

Mike Glennon is a statue in the pocket, but at least he’s not throwing interceptions.

These are the mantras I’ve heard vomited around the internet over the last 24-odd hours, accrued from Twitter, message boards, Facebook, and sports radio.  These places are all regrettably rife with stupidity, hyperbole, and meatballism (not counting the official BearsFansOnline.com message board, of course).

The relief that the Bears lost a close game feels palpable, and I don’t understand this level of acceptance.  Why are we so accepting of moral victories?  I know it’s been extremely difficult trudging through the misery of the last 5-odd years of Bears football, but these were the type of losses we as fans should’ve been cool with the last two seasons of John Fox/Ryan Pace reinvention.

Close, hard-fought losses were the signal fires I anticipated mapping out the last two seasons as Ryan Pace rebuilt the underbelly of the roster and honed his abilities as a talent evaluator, but last year in particular should’ve sent a message to John Fox that going with the talent-poor veteran over the talent-laden rookie is a backwards and detrimental philosophy.

It took an underperforming Jeremy Langford, an oft-injured Ka’Deem Carey, and an 0-3 start to the season to get Jordan Howard into the mix, and well before his first NFL start, Howard was praised as an inspired selection by Pace with a high talent ceiling and gifted skillset.

Wouldn’t you know it, Howard displayed that gifted skillset against NFL level talent and was named a Pro Bowl Alternate.  Shocking.

So how many Glennon-led losses will it take before John Fox puts Mitchell Trubisky into action?  Nobody seems to know, but the amount of apologists in action defending the apparently valiant late game fledglings of Mike Glennon risks keeping the public in a place we all need to grow out of:

The Station Wagon is a very comfortable, familiar mental vehicle for Bears fans.  Conservative, utilitarian, functional.  It gets us from point A to point B, it’s unlikely to break down, it’s relatively inexpensive, and it’s not some flashy ride.  It’s kind of ugly, but there’s a grimy endurance imbued in every fake grain of wood paneling that simply won’t quit.

I was reading about station wagons in preparation for this article, and this passage from Charles Moss’ article in The Atlantic got my attention:

“I remember gathering as a family, all six of our heads peering at the dashboard as we watched the car surpass 100,000 miles on the odometer, celebrating in its resilience; but not me. I waited impatiently for it to die so we could buy a smaller, slightly cooler car. But it never did.” – The Last Great Gasp of the American Station Wagon

While Moss goes on to explain his growing fondness for his family’s hardy old Chevy Caprice, applying this as a football metaphor isn’t something I want to do.  I don’t want to see the Bears going 7-9 or 8-8 with Mike Glennon.  There’s a Lamborghini in the fucking garage, yet here’s a shirtless John Fox waxing a Vista Cruiser at the car show with a small crowd of oafish Bears fans nodding with approval at its blue-collar features:

MIKE FROM TINLEY PARK:  “Got a great deal on him, too; just had-ta pay that first year.”

CHUCK FROM ORLAND:  “Didn’t win a lot, nah, but ya know what?  Da Bears defense was good and he kept’em in close games.”

There’s a lot of fans like me that want nothing to do with the Mike Glennon experience.  Droves of them, in fact, some of whom were in attendance at Soldier Field on Sunday when the undeserving hack brilliantly showcased his prowess through the first 3 quarters, summarized beautifully here by The Athletic’s Dan Durkin: 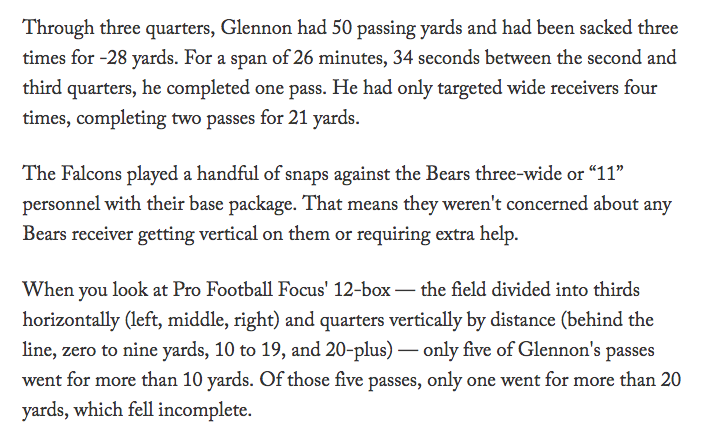 Rick Morrissey, venerable Bears beat for the Sun-Times summed it up:  “An NFL team has to work hard to be that unproductive in the passing game.”

Listen – I know Kevin White got his shoulder wrecked and is likely out for the season again.  I know Cam Meredith’s torn ACL has him out for the year.  I know the offensive line is missing Kyle Long and features two tackles who are quite poor at pass protection.  I know there’s a sense of contractual and moral obligation to start Glennon due to signing him to that stupid contract & fellating his bruised pride.

…but you know who has worked with the 3rd and 4th tier receiver group all summer?

You know who has the mobility to improvise with athleticism in the face of a pass rush?

You know who doesn’t give a damn about Mike Glennon’s sob story?

The fucking Lamborghini in the garage.